Digital Learning Dialogues: How to make your curriculum accessible

Natalie, Boclips Account Manager and education accessibility advocate, discusses what instructional designers can do to stay on top of accessibility requirements and democratize digital learning. 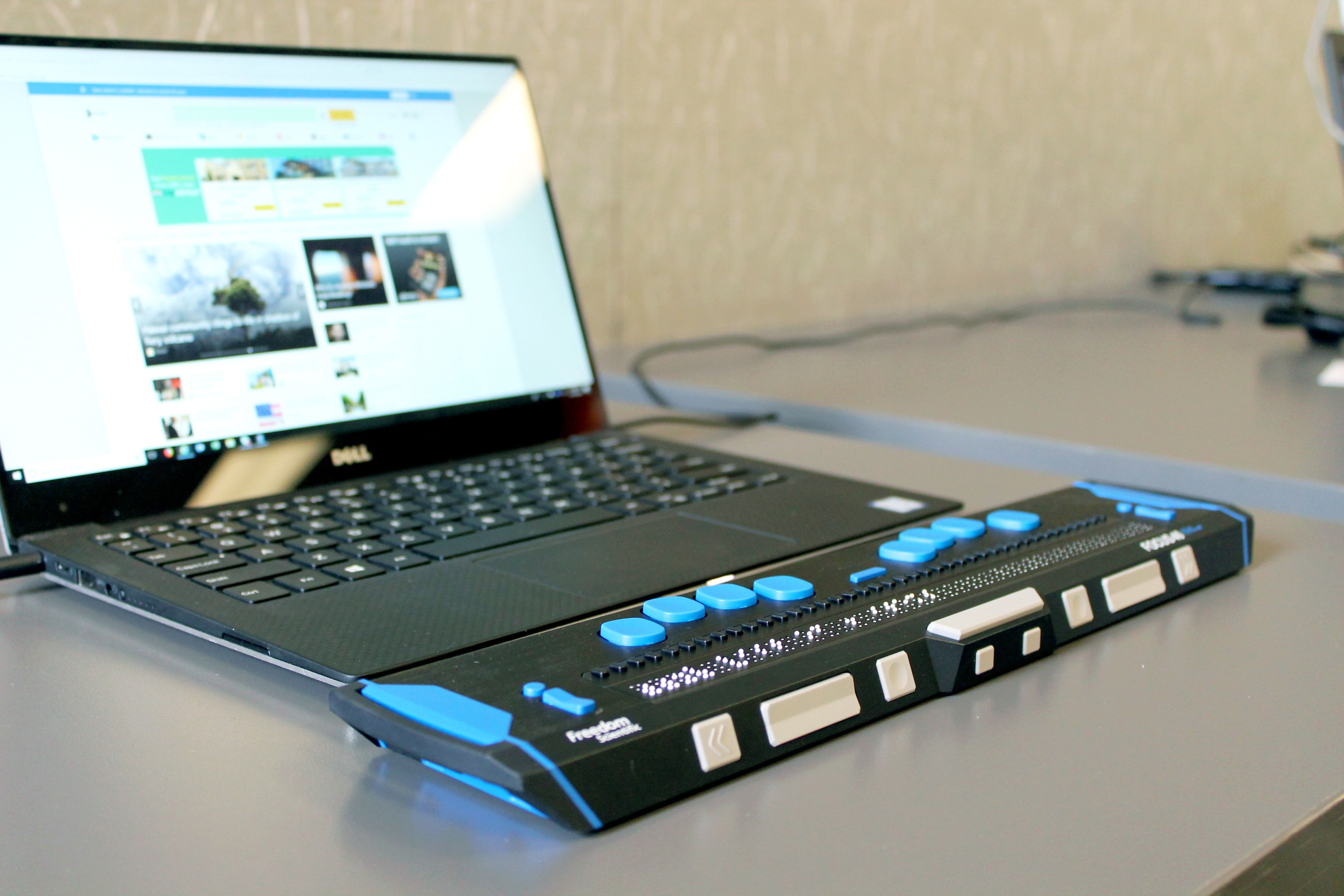 A laptop with a refreshable braille display sits open on a desk. Photo credit: Elizabeth Woolner

In the first of a two-part interview, Natalie Jung, an Account Manager at Boclips, provides an overview of accessibility in digital learning. She also describes the experience of losing her sight in her 20s.

Accessibility is deeply personal to me. I’m legally blind. I use accessibility aids every day, including screen readers for computer work and audio descriptions for visual media.

I like to think of myself as an active member of an online community of people with different abilities — folks who are also using the internet and accessibility tools to get by at school and work, and to thrive.

Editor’s note: This transcription has been edited for clarity and length.

Natalie Jung articulates the differences between universal and accessible design. She shares an example of universal design in action. [For a transcription, scroll to the last Q&A on this page.]

To start off, Natalie, could you share your perspective on why accessibility considerations are important in digital learning?

Accessibility is so important in digital learning. I’ll share a little accessibility history in the States for context.

In the past, U.S society lacked awareness of different learners’ needs in the classroom. Educators worked with individual students using individual education plans (IEPs) until a couple of decades ago, when the ADA passed and helped people with disabilities advocate for their rights in the classroom and workplace.

In the ’90s and 2000s, when the internet became more prominent as a place of commerce and as an education space, changes happened really quickly. It was difficult for learners with different abilities to gain access to information that was spreading rapid-fire across the globe.

That difficulty triggered several accessibility initiatives in the 2000s. I’m thinking of the Web Content Accessibility Guidelines (WCAG) in particular. The WCAG basically extended what was outlined in the ADA to the internet, and later to mobile applications as well.

Fast-forward to today: Educators are coming to understand that education is not “one size fits all.” They’re learning to consider the needs of all learners — learners who have internet and computer access and are neurotypical, as well as people with different experiences. For example, people with ADHD who have difficulty focusing. People who have sensory impairments like I do, who can’t see, as well as others who can’t hear. It’s important to put yourself in the place of any learner who could foreseeably use your product and make sure they have information available and accessible to them.

Have efforts to improve accessibility in digital media evolved in recent years? If yes, how?

Digital media have evolved a lot, over the last couple of years especially. Others in the disability community and I have seen a lot more people focused on the needs of learners of different abilities since Covid.

To share more of my personal experience, I’m legally blind due to a condition that affected me when I was 25, a couple of years ago. My brother has the same condition. He was affected in the late ’90s.

As a fully sighted person, I watched him navigate the public school system and college. Compared to my own later experiences, the differences are stark. Audio descriptions in the ’90s, for example, were not good. They earned a poor reputation in video because the descriptions would sometimes talk over the original audio. Screen readers were inefficient, as websites weren’t built for them. He tended not to use them and opted for different accessibility techniques.

My vision loss in 2018 and 2019 wasn’t easy by any means. But by comparison, it was nice to go to Netflix, for example, and know Netflix originals all had audio descriptions. I also know any app my friends are talking about that’s on the App Store has been vetted for accessibility requirements. So, I have confidence I’ll be able to use those apps without issue. Other apps that are available for download online, not through the App Store, I feel less confident about.

It’s interesting how digital media have changed. For myself, I feel pretty confident in my life that most media are accessible. With the ADA and WCAG 2.0, I at least know that they should be. I have the resources I need to advocate for myself.

It sounds like your brother, encountering accessibility resources for the first time in the ’90s, experienced them sort of as an afterthought  — whereas by the time you needed accessibility aids, many of the kinks had been worked out, and aids had become more standard.

That’s right. Before Covid and the widespread switch to digital learning, students like myself often got one-on-one support in the classroom. My brother did when he was in public school. Switching to remote, students are likely separated from direct human support. That can make it easier to detect gaps in accessibility in the digital interface schools are using to communicate. Or in the videos students are watching that an aid had previously described to students with sensory disabilities in the classroom.

In my opinion, those gaps explain why a lot of customers have reached out with accessibility questions in the last couple of years. As a member of online disability communities, I’ve heard people on Twitter say this moment is an opportunity, and that they’re being listened to about accessibility needs for the first time in a while.

Narrowing in on education, what barriers to accessibility commonly arise in digital course curriculum development? What do you recommend educators do to overcome them?

I won’t lie — it’s difficult. Everything on the internet is oriented toward visual learners. At least, as a visually impaired person, it seems that way to me.

There also seems to be movement toward tactile, interactive learning experiences. An interactive might, for example, require students in a chemistry course to move their mouse to virtually drop an acid onto a pH strip. That specific example wouldn’t be impossible for a visually impaired person like myself, if the interactive were coded properly. I could use my screen reader and keyboard navigation to complete the task.

But it’s still not the same. Although I’d qualify that as an equitable (i.e., accessible) experience, I don’t think it achieves the same level of engagement for different learners. That’s not to say I don’t think those types of exercises should exist. The majority of learners are visual learners. Exercises of that sort can be super helpful to them. But I will say, it is difficult when the predominant mode of instruction is modeled for people who are the opposite of you.

It’s important when designing curriculum to have resources for visual learners, but to also balance them out with podcasts, for example, for auditory learners, and with text. If you make information available in multiple ways, students can choose which way works best for them and enjoy a variety of media. Whereas if you have only visual, or auditory, or text-based lessons, you’re going to lose some students.

That’s good advice. And it sounds helpful for everyone.

Totally. And it’s not only about ability. Some people are just auditory learners, for example. Personally, I put on podcasts while doing housework because I like to engage with my hands while listening, rather than sitting in front of a screen.

When you build curriculum and technology in an accessible manner, you’re helping more than just folks with different abilities. You’re also helping people with hidden preferences they haven’t vocalized to your user experience team before.

Understanding the limitations courseware creators face, is it fair to say that they shouldn’t ask how to accommodate learners with different accessibility needs, but how to design for people of all abilities?

Yes, a big theme in accessibility conversations is “universal design” and how it differs from “accessible design.”

The company ended up replacing the braille with embossed circles on one bottle and lines on the other. It was simple: anybody could learn what the circles and lines meant. That design could help someone like me, who can’t read the bottle. It could also help someone who’s not visually impaired but, say, has soap in their eyes, or who just wants to grab the bottle without looking.

Thinking of how to optimize your platform or courseware that way — in the most simplistic way possible — for all learners, is important.

Boclips is on a mission to make learning more captivating with video with an easier, safer way to access videos from the world’s leading video producers.